Learning All Over Again

One thing I’ve noticed about my work when I paint is that it lacks contrast, so I’m trying to force myself to paint with harsher lighting. I can’t say as I pulled it off spectacularly here, but it’s just a start I suppose. I’m also finding myself rather frustrated with trying to find the perfect app. Painter has just too much, Painter Essentials too little. Photoshop, I find next to impossible to paint in, there just seems to be no natural feel to it at all.

The above image was rendered in Alias Sketchbook, as usual.. but let’s face it – it’s a dead app. Autodesk have done nothng to move the product forward since buying Alias out, which is a crying shame as with just a few small adjustments it would’ve been the finiest tool out there, bar none. I’m currently playing with Open Canvas on trial version as an alternative, but not having a huge amount of luck re-creating the brushes I’m most fond of from ASP.

In other news, my PC got a rather dramatic overhaul over the last two weeks due to it failing spectacularly at every given opportunity.

Specs now are as follows:

Along with a bunch of other stuff like extra fans and a new power supply to actually get all that crap to power up. 😉 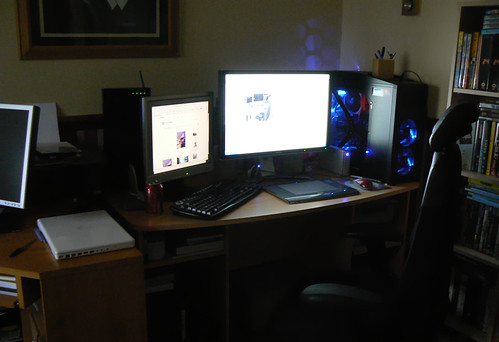 *This is not an advert for Overclockers, it just happens that I bought most of it from there anyway. But as an aside, the service was spot on and delivery fast.

The only real issue we had was finding that my old PSU wasn’t meaty enough to handle all those fans (and that card) so we had to invest in a new one quickly, as I need it for work. Which sadly meant going to PC World. Having said that, the PSU we picked up is unbelievably quiet and that monster is sat on my desk less than a foot away from me and I can’t even hear it. Looks dead bonny with all them blue LEDs as well.

Three Minutes and Half a Chimp
Trick or Treat!