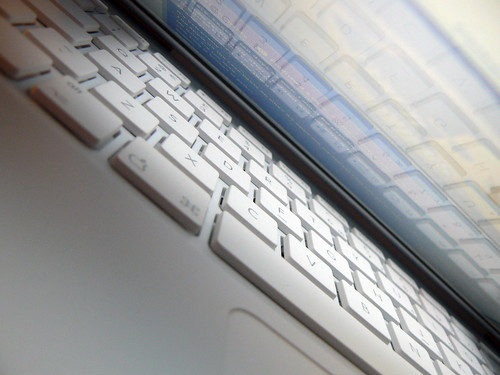 Well, i’ve had a few days to tinker around with the Macbook, and so far…. I love it. There are a few little things that bug me, well one really. And that’s the disk image application malarky. Most of the apps I’ve downloaded so far have been fine, but for some reason the usually impeccably behaved Firefox is refusing to play nice. After downloading it about three times and cocking up the installation I finally managed to get it to go into the applications folder, but for some reason the disc image is refusing to be ejected from the desktop. Any advice on that would be appreciated. I’m hoping it’ll piss off the next time I shut this puppy down (yes I am typing this entry on it!).

Other niggle – I can’t type to save my life on this, I’m used to clacking away on a nice big chunky keyboard. As I mentioned before, my nails are too long, and today I noticed that the nail in my middle finger (right hand, let’s get the specifics right} had a crack halfway down. Thinks I ” hmmm better cut that before I rip it off accidentally”.

Yup, I went to bed for a bit this afternoon as I was wiped out, and within seconds of waking up I’d ripped that sucker half off. There was a brief flash of pain, followed by a long searing flash of pain. Then blood…halfway down the nail, and to cap it all I had to cut it shorter with it still dribbling blood. So now my nails are short but my typing is still arsed as I have one fat and painful finger. Ho hum.

Anyway, back to the Mac. I took the above image earlier, but I’ll probably do some more in the cold light of day tomorrow as usig the flash in here at night just shows up my short-comings in the field of housework. Oh, the placement of some of the keys is nothing short of bizarre – caps lock is just above shift, so I end up hitting the wrong one all the time, and the @ key seems to be in the same place as a US keyboard (if memory serves me well). so far I’ve purchased Delicious Library (Had to be done. It sends my cataloging anal streak positively aflare with geeky joy), and have downloaded Adium, NVU and Textwrangler, as seen on the Ten Mac Apps Every New Mac User Should Own entry on Paul Stamatiou’s blog.

So what else? Well GarageBand has a built in podcasting app, so maybe I’ll look into that at some point.. maybe do a video podcast of work, thought to be frank I could probably do that just as well in Open Canvas, just no audio.. I’m pretty sure the internet doesn’t need another nobody broadcasting tripe out into the ether anyway. Also, iPhoto is rather nice, but i don’t really want to clog the macbook up with my digital photos.. so I can’t see that getting a great deal of use. I’m totally in love with OS X Tiger and the active desktop but there’s a whole raft of widgetty goodness that I wouldn’t use.. go figure. Setting up the wifi was a breeze, I just booted up for the first time, it bluetoothed into the router and that was it. Job done. Now if I could stop hitting caps lock instead of shift I’d be a very happy bunny indeed.

One thing that did surprise me was thws the gloss finish on the outside of the book, it’s nice an’ all but I’ve already noticed a few fine scratches starting to accumulate and the poor thing hasn’t even left the house yet!

Much has been made of the glossy screen but to be honest I dont notice it. Perhaps my refusal to dispense with a CRT for my main monitor means I’m more used to reflections.

I’ve decided I don’t like trackpads. I’m using the arrow keys (which irritatingly aren’t marked as arrow keys so I had to ask a mac-owning friend where the frick they were) more and more. That’s about it for now.. I’ll leave you all (three of you) with a selection of ‘waiting for a render’ doodles from the ol’ moleskine…..