Never Rains but it Pours 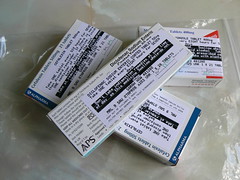 Well, this is my life for at least the next week. I’ve actually had to set up alarms on my mobile so I can remember which one’s to take, and when. As may be obvious from the last entry, I’m not the only one having a shit time of it at the moment. I’m not a huge believer in washing your dirty linen in public, but it beggars belief just how many things have gone wrong for us since we came back from the US two weeks ago. Not to mention the fact that I had a roaring cold while we were there anyway. I wonder if someone is trying to tell us something? Time to do something? Time to break out and take some risks? On the other hand I could just post about it on the internet and invite people to come and sympathise with me.

On the upside, depending on how you look at it, I’m getting a strong urge to re-skin the site again. I can’t make up my mind whether to go for a trendy web 2.0 look, something minimalist with lots of white space.. or something bright and cartoony. I know I’m a bit sick of looking at this one.

I’m going to also try and get some more renders and screenshots into the ingame gallery, as Tycoon City has been out for a while now, and I haven’t exactly mentioned it much. It’s the first game I’ve had any real input in, other than as Concept Artist, and it’s kinda cool when I load it up on my ‘pooter to see the 2d and 3d art I created for it appearing. Particularly the desktop icon and the system settings, and all that guff. The loading screen used to be an illo I created using a shot from the Empire State as reference, but in the end I decided a screenshot was more appropriate and used that instead. I’d like to point out I’m not responsible for either the box art logo, or the loading / splash screen logos. They were created by contract workers, working directly for Atari. I won’t go into what I think of those….

And Now a Word From Our Sponsors….
Exclusive